This is a review of the Escape Room “School” offered by LostExit in Prague, Czech Republic. 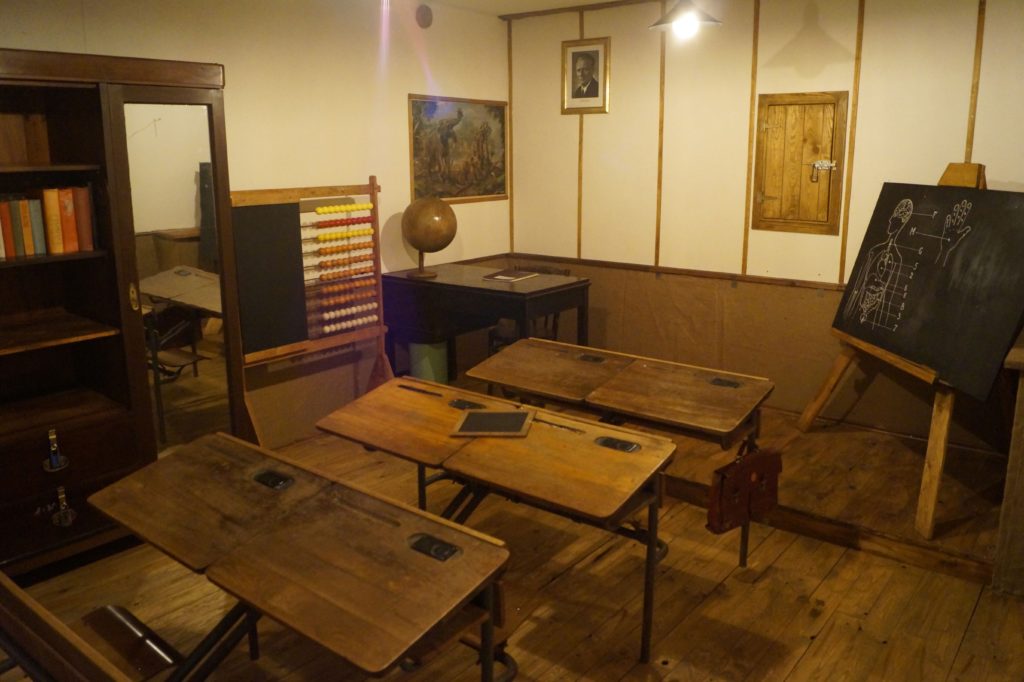 Although we have already been to Prague three times, LostExit was unfortunately completely unknown to us. Luckily, this good insider tip was mentioned to us by another operator during research for our fourth visit to the Czech capital. LostExit is located in the Old Town (Prague 2) and operates two rooms, “School” (80’) and “Cinema” (90‘), which can be played in Czech, English and now even German. Or to be more precise, we had the briefing/debriefing completely in perfect German. The games are largely language-independent.

The stories for both missions are very detailed and credible. School is about a school building in the former Czechoslovakia that was closed in 1958. A new teacher, a caretaker couple and several missing children seem to play a leading role in this extremely mysterious case. We have come to finally shed light on the mystery.

Not an easy case! There is a lot to do in the very authentic looking classroom and the rest of the school building.  Although the puzzles weren’t linear, and we felt like we were actually progressing fairly quickly in our investigation, we ended up with a six-minute detention.  So step on the gas right from the start! The puzzles and tasks are sometimes more, sometimes less complex, but are always logical and fit the topic very well.

What I really liked, for example, was a found object in the final phase of the game, with the help of which we were able to work out some “puzzle pieces” that are urgently needed for the final solution to the case.

I think “School” can still be played well with 4 or 5 investigators, because the puzzle structure and the space (after the slightly smaller hallway where you start) allow it. For me, LostExit is one of the providers that you should definitely visit in Prague. Many thanks to Milos & Marian for the great hosting. We felt very comfortable with you.

On a small hill in the foothill village of Malá Lhota, you cannot miss the school building where children from the village used to go. The plaster is scratched and the boarded-up windows prevent random passers-by from looking inside. Three rows of desks, a teacher’s desk, a blackboard, an abacus and a large cupboard with books still crowd the small classroom, where no sunlight can penetrate.Anywhere else a similar school would have been closed down, but in Malá Lhota it still stands, a silent witness to the fateful event of 1958. It is called a special school. Not perhaps because the teachers here once imparted knowledge to youngsters in need of special care, but because it strikes the memorialists as a place with a special past.

Nora Pátková was in charge of the education of the pupils. She was a thirty year old spirited woman, a graduate of the teacher’s institute in Kroměříž, and nobody really knew why she had come here in the summer of 1948. Until then, the children were taken care of by Alžběta Ruppertová and her husband. However, it was not desirable for them to continue teaching. Mr. Ruppert became a janitor and died of a heart attack in 1952. Elisabeth blamed everyone around her for hurting him and may have been responsible for his untimely passing. In order to keep her small apartment in the building, she took over her husband’s job and did the cleaning and maintenance of the school, which she didn’t like very much.

If a casual visitor were to come here the day after Easter, April 8, 1958, shortly after 10:30, he would be surprised to find that there was no Czech class going on, but rather a grave silence. There was not a foot in the classroom. Only a few sweaters in the corridor showed that children had definitely come. Where had Josefina Plánková, Jan Čermák, Terezie Krondlová, Františka Joštová, Bedřich Lončák and Růžena Hornová gone? And what happened to the comrade teacher?