This is a review of the Escape Room “Don’t take a breath” offered by Verone in Athens, Greece. 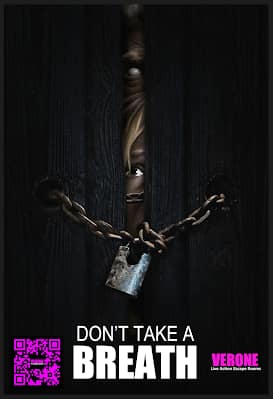 This escape game is based on the American horror movie “Don’t Breathe”, which made its cinema debut in 2016.

A group of petty criminals breaks into houses together and then sells the stolen goods. The father of one of the gang members runs a security company. He alerts the group to a large sum of money in the house of a blind veteran. So the gang sets out to break into the old man’s house at night. Everyone expects an “easy job”, but this proves to be a fatal mistake.

Verone – Live Action Escape Rooms is in Acharnes, a municipality of Athens, about twelve kilometers north of the city center. Even if the journey is a bit further, it’s worth it! Of course because of “Don’t take a breath”, but also because “The Museum” is across the street, another 120 minute Escape Game. We also liked this one a lot. Entertaining and funny with lots of role playing.

We were, as far as I know, the 1st team that played “Don’t take a breath” in English. They worked on the translation right up until we arrived. Everything went smoothly.

The house we want to break into is huge! Over 230qm! Our informant meets us, sketches out the building, and instructs us on how to disable the alarm system. It’ll be a piece of cake, won’t it?

This game has a lot to offer! First of all, excitement and lots of live action!

The name “Don’t take a breath” is really fitting. We held our breath a few times. The old man ?? has really shaken us up and always seems to be one step ahead of us. Easy money, my ass. In this scenario there is a lot of interaction with the actors, who clearly enjoy their role.

The setting is authentic. The crew is one hundred percent committed. If you get involved in this adventure, you can be a protagonist in a first-class psycho-thriller for 2 hours.

After the game we sat together a bit with the operators. They’re nice people and enthusiastic about their project. Thank you for an exciting afternoon!

Verone, whose trademark is a pig, is working on a second project called fifty shades of pork. We are very excited.

Everything seemed to be a good idea for easy money, they had all the information that even the keys to the house needed from the security company owned by the father of one of the friends! A helpless, blind man would not be a great obstacle between them and money. But reality has become a pure nightmare. Because they did not know that the “helpless” blind man was a US Army Special Forces veteran who always carried with him the markings and perversion of the Iraq war in 1991. And his huge 230sqm isolated home was his own business theater . This home in this infamous neighborhood hid more secrets than expected and ended up being a battleground. Will the invaders survive a deadly escape game?