This is a review of the Escape Room “The Sanatorium (Night)” offered by Lockhill in Athens, Greece. 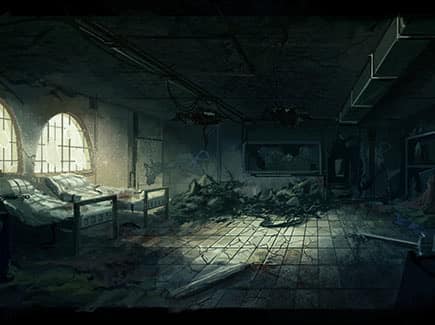 The Sanatorium is the third part of a trilogy about Nathan Jones, a professor of the University of Boston, who spent the last year researching a recent archeological find, from a small and good forsaken village in the north. Now he’s missing for two month. What is left is a folder with many newspaper clippings, photos and a small hand drawn map. On the map a small village is circled in red and underneath it, a name is written in the same red: LOCKHILL. Our job is to go to Lockhill and find out what happened.

The most thematic escape game in Europe is written on the website of Lockhill. Well, I wouldn’t argue with that. The Lockwood Manor, The Voodoo Shop and The Sanatorium are the tree parts of the story.

The Sanatorium can be played with 1(!) to 5 persons in three different modes that are:

The sanatorium is certainly rightly to be found on the top places of the Athens ER rankings. No matter in which mode you play it. After we played Sanatorium in April in Day-Mode, we decided to try it this time in the Night-Version.

It was good that this room had only half the puzzle, the atmosphere had somehow paralyzed me and constantly frightened me. From the first moment we stepped into the sanatorium I couldn’t think clearly. The puzzles are just medium difficulty and I did them already half a year ago, anyway under these circumstances it’s hard to concentrate, because you constantly look around, observe the surroundings attentively and you think you’re in danger.

Well, you are in danger! The sanatorium is home to strange creatures that you would rather not encounter. Each of them has its own character and a certain way of moving. If you meet one of them, you must react correctly. Sometimes it’s better to hide and behave quietly, sometimes it’s better to go as far as you can.

The acting is amazing! So frightening and creepy! The Scenery make feel like you’re in an abandoned sanatorium. The spaces are perfectly designed, very realistic and atmospheric. Nice story and gameplay.

I really like Lockhill! For me its adrenaline pure and one of the top 3 Escape Game providers in Athens. I could even imagine coming back a third time and trying the midnight mode as well.

Recommended team size 3-4 Players and bring a second pair of shoes in case you get wet feet.

“The sanatorium is no longer used. From what I’ve read, it was used for both the mentally and the physically impaired and the living conditions in that place were truly horrendous. The strange thing is the other day I was passing by, I swear I think I heard someone screaming from the inside. I surely must have been mistaken though because it was closed down long ago.”
– Excerpt from the diary of
Professor Nathan Jones –
You can explore The Sanatorium during Day or Night mode.
During Night, thick smoke and strobe lights are used. We advise bringing an extra pair of shoes and wearing comfortable clothes.