This is a review of the Escape Room “Cinema” offered by LostExit in Prague, Czech Republic. 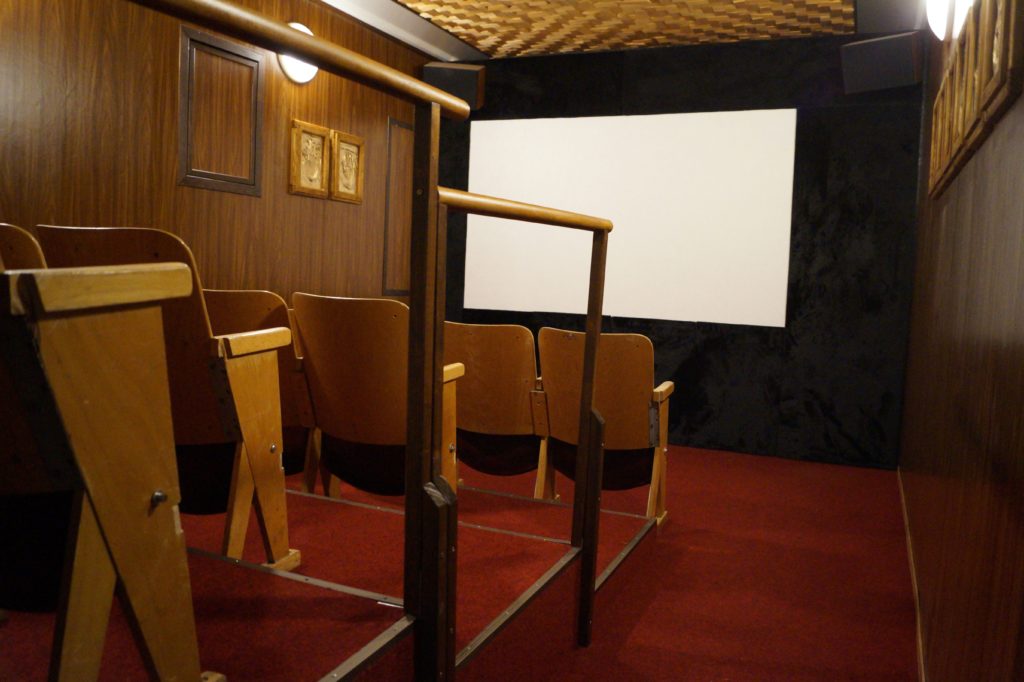 The second LostExit narrative centres on a small retro cinema and its oddball projectionist who openly dreams of becoming a director and making his own film. Everyone, including us, thought he was a weirdo and laughed at him behind closed doors … until one day an invitation from him to the premiere of his first film “The Disappeared” arrives. „That’s unbelievable!“ Of course we don’t want to miss it.

Excited we make our way to the small Dawn cinema, where we are personally greeted by the newly appointed director. We are surprised to find that the cinema (there are only 14 seats) is not sold out. In fact, we are the only guests. What an honour! We take our seats expectantly and the movie begins…

So far a very interesting plot and what follows has original twists and turns as well. Let yourself be surprised! The nostalgic screening room looks authentic and the rest of the set is also consistent.

As in the first scenario, “School”, there are several smaller tasks to be solved in “Cinema” in order to reach the main goal in the end. There were fewer puzzles than in the first game, but there were also a few quite crunchy ones. We needed a tip or two.  Up to 6 spectators are allowed in the hall, but I think you have the best cinema experience with 3-4 visitors.  A very friendly provider with two good rooms that should definitely not be missing from your Prague playlist.

Did you get an invitation to the premiere of the film in your inbox?
There is a rumour among the people in the Dawn Cinema neighbourhood that there was one such film screening recently, but no one came back from it. Maybe it’s just gossip, but what if… Either you’ll get to the bottom of this “mystery” or the locals will have something to talk about again.

There are places where time stands still. Don’t believe it? How about the Dawn Cinema. According to the stories of those who remember it, it was screened here at the end of the 50s and since then it has undergone some changes, but basically it has kept its retro character. Perhaps thanks to a local projectionist who took over the craft from his father. Gone are the days when audiences filled all fourteen seats, but it’s still open just the same. Morning to night, Monday to Sunday.

The projectionist and the box office in one person once had ambitions to be a director, he loved Méliès’ Journey to the Moon, Murnau’s Nosferatu, Gone with the Wind with Vivien Leigh and other old films, but that wasn’t enough to make him an artist himself. He even created a small museum in a part of the cinema of old techniques used at the dawn of cinema. As the years went by, the man who was full of enthusiasm became an oddball who didn’t talk much.

Everyone wants to fulfil their dream, so the projectionist tells everyone that one day he will definitely make a film. It’s called The Disappeared, and he says he’ll make it famous. But he’s been saying that for years, and everyone makes fun of him. That’s why they were surprised to hear about the upcoming premiere…